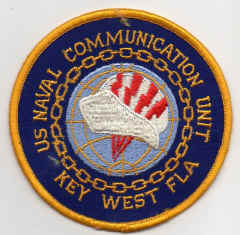 Naval Communications in Key West has a colorful history. The Naval Radio Station (NAVRADSTA) at Key West, Florida, was established in the year 1905, its purpose being to form a link in a chain of Wireless Telegraph Stations in what was then known as the Coastal Signal Service of the Navy. This chain extended from Cape Elizabeth, Maine, to New Orleans, Louisiana, and included Guantanamo Bay, Cuba, San Juan, Puerto Rico, and Colon, Isthmus of Panama. The call sign NAR was established for communications station Key West, and has been in service ever since. This gives Detachment Key West the distinction of being the first, and the oldest continuously existing Telecommunications station in the Department of Navy. Although several name changes have taken place over the years, and the location has shifted to different buildings, NAR has never gone off the air, and has provided the best Naval Telecommunications services since it's inception. Here are the major highlights of this history:

2004 - Operations and Maintenance for Naval Computer and Telecommunication Station Jacksonville, FL Detachment Key West. - The Fleet Industrial Supply Center Norfolk Detachment Philadelphia intends to procure a 100% competitive small business set-aside in accordance with FAR part 12 for Operations and Maintenance for Naval Computer and Telecommunication Station Jacksonville, FL Detachment Key West. NCTS JAX DET Key West consists of operations and maintenance facilities primarily located on Naval Air Station Key West FL within Buildings A1004 and A1005. The Detachment security CCTV and IDS system equipment is extended to and located in Naval Air Station Key West Building A324. The main Naval Radio Transmitter Facility (NRTF) at Saddlebunch Key consists of primary building J1561, and utility buildings J1700 and J1701, as well as some small sheds and storage containers. Requirements include responsibility for all preventive and corrective maintenance to ensure the continuance of all systems and equipment (including security and C4I networks) and interface with remote users at NCTS Jacksonville, NCTAMS LANT, JIATF South, and other local user supported locations to observe, assist and instruct as required any remote government sponsored user on the restoration of all NCTS JAX DET Key West equipment to meet complete mission performance requirements. Requirements also included include troubleshooting and timely repair of all NCTS JAX DET Key West mission related circuits, networks, transmitters, receivers, security systems, air conditioning, power generation, antennas, and all related or associated systems. Support is required on a continuing 24 hour per day, 7 day per week, 52 weeks per year basis and includes requirements for emergency call back. The Contractor shall furnish all management, supervision, labor, materials, equipment, tools and vehicles necessary to plan, schedule , coordinate and assure the effective operation of telecommunications at NCTS JAX DET Key West. Contractor personnel will be required to have a Secret security clearance at time of proposal evaluation to perform the duties outlined in the performance work statement. This requirement will be evaluated on a best value basis and offerors will be expected to submit both price and technical proposals for the consideration of the Government. All qualified small businesses are encouraged to submit proposals for consideration of the Government. A firm-fixed price contract is anticipated to result from the solicitation. It is the intention of the Navy to issue this RFP through electronic means only. This RFP s hall be available upon issuance at http://www.neco.navy.mil. All contractors must be registered in the Central Contractor Registration. The NAICS code for this requirement is 5171 10.

Receiver Site (includes 39 ea. R-2368/URR receivers)
The Navy Radio Receiver Facility Boca Chica provides control and audio signals to operate high frequency receiver facilities from a remote location. Remote control of the radio equipment at the receiver site is accomplished by use of the Element Management System/Automated Technical Control/Automated Technical Control (EMS/ATC). The primary purpose of the receiver facility is to provide analog, non-secure and secure voice and data communications to DoN, NATO, Allied, Coast Guard, and DoD Joint activities. The site is linked to NAVCOMTELSTA Jacksonville Detachment via DRAMA Microwave and Leased landline circuits. The site is linked to NAVCOMTELSTA Jacksonville as well as NCTAMS LANT Norfolk VA via various DISA communications trunks and circuits.

Transmitter Site (includes 24 ea FRT-96 transmitters and 23 ea. URC-119/URT-42 transceivers)
The site at Saddlebunch Key provides High Frequency (HF), and Medium Frequency (MF) Radio Transmissions. There are 37 HF antennas, and 01 MF antenna four tower array, in support of the transmitters. Remote control of the radio equipment at the transmitter site is accomplished by use of the Element Management System/Automated Technical Control (EMS/ATC). The primary purpose of the transmitter facility is to provide analog, non-secure voice, secure voice and data communications to DoN, NATO, Allied, Coast Guard, and DoD Joint activities. The site is linked to NAVCOMTELSTA Jacksonville Detachment via DRAMA Microwave and leased landline circuits.

Technical Control Facility
The TCF site at Boca Chica provides for monitoring, patching and testing of all Detachment network, truck, circuit and cable plant distribution systems. Management, patching, testing and control of these networks, trunks, circuits and lines are controlled primarily by the Element Management System/Automated Technical Control (EMS/ATC) computerized command and control systems. Remote control of the radio equipment at the receiver and transmitter sites is accomplished by use of the EMS/ATC. The primary purpose of the Technical Control Facility is to provide monitoring, testing, switching, command and control of various analog, non-secure voice, secure voice and data communications circuits to DoN, NATO, Allied, Coast Guard, and DoD Joint activities. The NTCF site is linked to NAVCOMTELSTA Jacksonville FL as well as NCTAMS LANT via various DISA analog and digital trunks as well as other leased landline circuits.