As we mentioned earlier, the fleet broadcast is the primary  means  for  delivering  messages to afloat commands. This section discusses a few of the other types of circuits by which a ship can transmit its message traffic ashore or to other ships for delivery or relay.

There are three methods of operating communications circuits: duplex,  simplex, and semi-duplex.
The mode of operation at any given time depends upon equipment and frequency availability.

Duplex
Duplex   describes   a   communications   circuit designed  to transmit  and  receive  simultaneously.  In such operations, each station transmits on a different frequency  and  both  stations  transmit concurrently.  Both stations are required to keep transmitters on the air at all times and to send a phasing signal at the request of the distant end.
Figure 1-11 shows a diagram of a UHF/HF full-duplex  FSK  (frequency-shift keying)  single-channel teleprinter relay circuit. There are two types of duplex operation: full duplex and half duplex. Full duplex (FDX) refers to a communications  system  or  equipment  capable  of transmitting simultaneously in two directions. Half duplex (HDX) pertains to a transmission over a circuit capable  of  transmitting  in  either direction,  but  only  one direction at a time. Small  ships  traveling  in company  normally use duplex in a task group common net in which they terminate with a larger ship that is serving as net control. The net control ship provides the ship-shore relay services. Ships  traveling independently can use this system for anon-call ship-shore termination to transmit their outgoing messages. 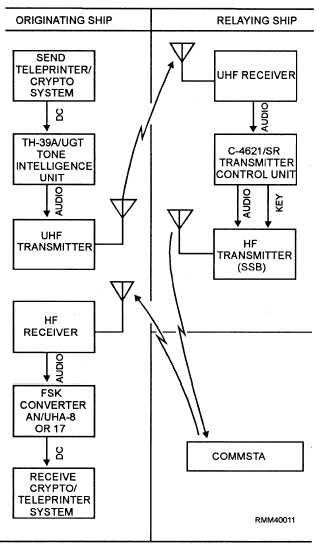 Simplex
Simplex is a method of operation that provides a single channel or frequency on which information can be exchanged (figure 1-12). Simplex communications operation is normally reserved for UHF and those ships that do  not  have  sufficient  equipment  for  duplex operation. In some cases, a simplex circuit can be established when equipment casualties occur. Where no HF simplex frequency is indicated or guarded, ships requiring a simplex ship-shore circuit must call on a duplex ship send frequency. The ship must state "SIMPLEX" in the call-up, indicating that the ship cannot transmit and receive simultaneously When a ship requests simplex operation on duplex circuits, the shore station may be required to shift transmitters  prior  to acknowledging  call-up.  If  no  reply is received within 45 seconds, the ship should repeat the call-up procedures. If a third attempt is required, the ship  should  check  equipment  to  ensure  proper operation. 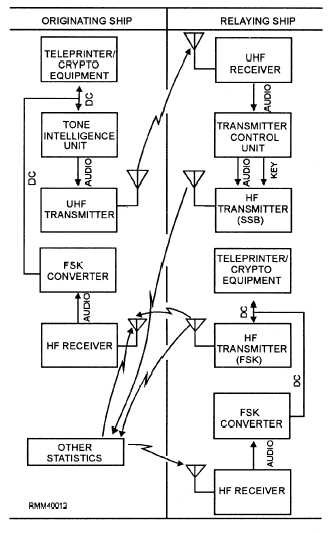 Semi-duplex
Semi-duplex   communications   circuits,   used primarily  on task  force/task  group/ORESTES,  are  a combination  of  the  simplex  and duplex  modes.  All stations  except  the  net  control  station  (NECOS) transmit and receive on the same frequency. The NECOS  transmits  and  is received  on  a  second frequency.  The  NECOS  may  transmit  continuously, whereas all other stations must transmit in accordance with simplex procedures.

UHF/HF  RELAY
The  UHF/HF  relay  method  permits  long-range, uninterrupted communications  during  periods  of hazardous  electromagnetic  radiation (HERO).  Figure 1-13 shows a block diagram of a UHF/HF voice relay circuit. Modern radio and radar transmitting equipments produce high-intensity RF fields. It is possible for RF energy to enter an ordnance item through  a hole or crack in its skin or to be conducted into it by firing leads, wires, and the like. Here is an example of HERO. An aircraft carrier is arming aircraft on board. During arming operations, all HF transmitters must be secured to prevent possible detonation of the ordnance. To maintain  its ship-shore  communications,  the  carrier transmits to a relay ship via a UHF circuit. The relaying ship then retransmits the signal on a HF circuit to a terminated  NAVCOMTELSTA. On-line radioteleprinters can be relayed, as well as voice, using this  circuit. 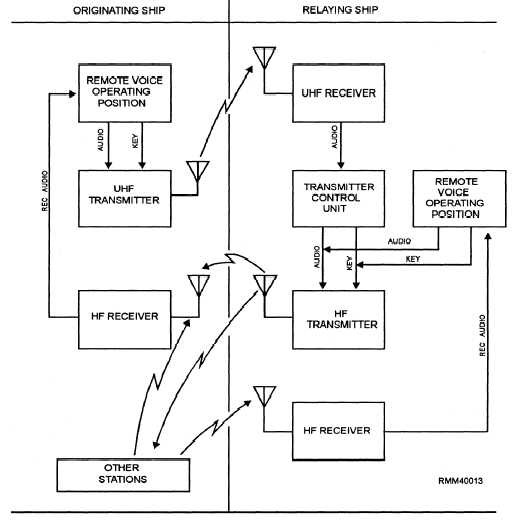 SECURE VOICE WORLDWIDE VOICE NETWORK
The secure voice network is designed to provide real-time  voice  communications  between  forces  afloat and operational  commanders  ashore,  using  either  HF  or satellite connectivity.  This  system  is  commonly referred to as GPS Worldwide HICOMM.
System Control
This system consists of three separate networks. Each network has an area control station controlled by a FLTCINC; either CINCLANTFLT, CINCPACFLT, or CINCUSNAVEUR. Each area has subarea control stations determined  by  each  FLTCINC  to  ensure worldwide coverage.
Satellite System Control
The   secure   voice   system,   using   satellite transmissions, has limited shore access points at the four COMMAREA master stations and NAVCOMTELSTA  Stockton,  California.  These  sites serve as the interface channel to both the wideband and narrowband voice systems in order to extend calls to operational commanders ashore.
Net Membership
If a ship, aircraft, or shore station needs to enter the secure voice network, it must be prepared to do so with minimum time delay.
Units desiring to enter the net on a temporary basis must specify the length of time and purpose  for  entering  the  net.  They  must  also  obtain permission from the appropriate control station. The area  net  control station  (NECOS)  is  responsible  for completing all calls originating from senior commands to all commands, ships, or aircraft within the specific FLTCINC's net. Certain rules must be observed when on the secure voice net, as follows: HF  transmitter  tuning  is  prohibited  on  secure voice.
Transmitters  must  be  calibrated  and pretuned on a dummy load. Final tuning may be accomplished during live transmissions. All stations must maintain a continuous log on secure voice. The actual time of significant transmissions must be entered into the log. When available, recording devices must be used in lieu of a paper log. The net operates as a free net unless otherwise directed by the area FLTCINC. NECOS retains the prerogative  of  exercising  control  over  all transmissions  to  ensure proper  circuit  discipline.

FULL-PERIOD TERMINATIONS
Full-period terminations are dedicated circuits that provide communications between shore stations and afloat commands. These terminations require allocation of limited   NCTAMS/NCTS assets. Therefore, the criteria for requesting, approving, and establishing such circuits is necessarily strict.
Termination Requests
Afloat commands and individual units can request full-period  termination  during  special  operations, deployments, intensive training periods, or exercises when primary ship-shore circuits will not suffice. Commands  should  request  full-period  terminations only when traffic volume exceeds speed and capability of ship-shore circuits and when operational sensitivity requires circuit discreetness or effective command and control necessitates dedicated circuits. The heavy demands placed upon NCTAMS/NCTSs for full-period terminations require maximum cooperation between shore stations and afloat commanders prior to and during an operation. Ships having a need for a full-period termination, either for training or operational requirements, must submit a termination  request  to  the  COMMAREA  master  station at least 48 hours prior to activation time. Emergency commitments or a command directive may necessitate a lead time of less than 48 hours. Whenever possible, however, the 2-day limit must be honored   to   achieve   maximum preparation   and coordination.   NTP   4   gives   details   of   required information that must be included in a termination request message. The COMMAREA master station will assign a shore station for a ship's termination circuit. Once the shore station has been assigned, both the ship and the station may begin coordination to identify specific equipment keylists and frequencies needed to effect termination. The shore station will also act as NECOS. Two hours prior to the scheduled termination, the shore station  can coordinate  with  the  ship  by  telephone,  local circuitry, or by primary ship-shore. When the ship shifts terminations, the securing of the current termination and the establishment of a new termination should coincide with a broadcast shift whenever   possible.   The   ship   must   submit   a COMMSHIFT  message.
Termination  Types
There are six types of full-period terminations, as follows:
Single-channel radioteleprinter using either radio path or landline transmission media;
Single-channel  low-data-rate  satellite  access using satellite transmission media;
CUDIXS special satellite access for NAVMACS-equipped  ships  using satellite transmission media;
Multichannel radioteleprinter using either radio path or landline transmission media;
Multichannel  radioteleprinter   using   SHF satellite transmission media;
and Tactical intelligence (TACINTEL) access for TACINTEL-equipped  ships using  satellite transmission media.
Equipment  Tests
To  ensure  that  circuit  equipment  is  in  peak operational  condition,  complete  system  back-to-back off-the-air tests must be completed 24 hours prior to termination activations. Check cryptoequipment back- to-back after daily crypto changes and prior to putting circuits into service. An  aggressive  PMS  and  quality  monitoring program is essential. When checking equipment, look for  power  levels, scorch  or  burn  marks,  proper operation  of  interlocks,  and cleanliness.  When  cleaning and inspecting antennas, look for cracks, chips, or blistering of insulators. Also check for deterioration, loose connectors, and correct insulator resistance.
COMMSPOT Reports
COMMSPOT reports will be submitted by all ships,  including nonterminated  units,  any  time  unusual communication difficulties are encountered. Ships will submit    the    COMMSPOT    to    the terminating communications   station.   Timely   submission   of COMMSPOT reports is necessary to minimize further deterioration of the situation. Rules  and  general  instructions  for  preparing JINTACCS formatted COMMSPOT reports are found in the Joint Reporting System (General Purpose Reports), NWP 1-03, Supp-1 (formerly NWP 10-1-13).

PRIMARY SHIP-SHORE CIRCUITS
Primary  ship-shore  (PRI  S/S)  circuits  are encrypted FSK/PSK teleprinter nets that permit ships to transmit messages for delivery ashore. This  service is available to units that do not maintain a full-period ship-shore termination.  Navy  tactical  UHF satellites  or  the HF/UHF spectrum may be used to conduct ship-shore circuit  operations.  Ships  may  use  this  circuit  for coordinating and establishing a full-period termination with  the  shore  station. The frequencies for  NCTAMS and  NAVCOMTELSTAS that guard primary fleet ship- shore circuits are listed in applicable CIBs distributed by   the   COMMAREA   master   stations. These frequencies are subject to change by the cognizant FLTCINC  or  by  the  NCTAMS.

OVER-THE-AIR TRANSFER (OTAT) AND OVER-THE-AIR REKEY (OTAR)
There  are significant  vulnerabilities  associated  with the handling of paper cryptographic material. Sound application of over-the-air transfer/rekey (OTAT/OTAR) procedures and techniques can reduce the amount of paper keying material required and reduce the potential for compromise. These procedures and  techniques  are  contained  in  the   NAG-16B Procedures Manual for Over-the-Air Transfer (OTAT) and Over-the-Air Rekey (OTAR). OTAT/OTAR also makes the transfer of keying material   more responsive   to   rapidly   changing operational requirements. The use of NAG-16B was developed  and  verified  by  extensive  use  during operation Desert   Shield/Storm.   The   specified procedures  served  as  an effective  vehicle  for transferring keying to satisfy rapidly changing joint and Navy requirements. Expanded definitions, general procedures, and equipments are found in NAG-16B.